In starting my role as Research & Instruction Librarian at Umpqua Community College I knew that I would be involved with the OER movement in Oregon, just not exactly how involved.

I came into this position with a cursory knowledge of open educational resources (OER) and what that entailed, and how such open materials were being used. I did not know how to create OER, I did not know who created them, I did not know there was a VERY active state-wide community, and I didn’t necessarily realize that I was going to be thrown into the mix and have to figure out what I was doing without much local support. Then I met Amy Hofer, Statewide Open Education Program Director with Open Oregon Educational Resources. She assured me that I was not alone, that she knew my position at UCC, and was familiar with past OER efforts here. I tried to attend the meetings and keep up with the emails and paperwork involved with ensuring that UCC faculty and staff were being compensated for their OER work. During most meetings I simply sat listening, starting to get to know some of the point people with whom I would be working.

It felt similar to when I was selected to be a director on the Massachusetts Library System Executive Board. I sat at meetings and acronyms were thrown around that I had never heard, and the imposter syndrome was strong. This time though, I had 8.9 billion other duties to focus on, so the imposter syndrome stayed down below the surface.

I began working more and more with faculty on my campus who had been early adopters of OER, from creation of new materials to remixing open textbooks. I began to understand how these puzzle pieces fit together, and how I could use them in my own 3-credit Library & Internet Research course. My entire course needed an overhaul, but I started small, knowing that I had minimal time to invest until the summer. I made textual edits as I could, updated resources when necessary, and then decided to try my hand at a new (for me) medium, comic strips.

I started with a small topic, Boolean Operators, that I felt I could teach people using a visual medium wholly different from the standard Venn diagram. Don’t get me wrong, I love me some Venn diagrams, but I feel like they are a bit overused. I selected this riveting topic for my first project and opened up a Canva page. As I always do I started off by pulling up a blank infographic page, which was just wrong. Then I said “I bet I could make a cute George Boole. He’d totally be a cat person.” You can see the finished result by clicking on the Boolean Operators comic below; for alt text visit Boolean Operators: A Comic Strip Text. 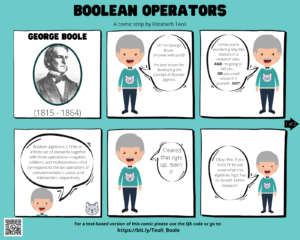 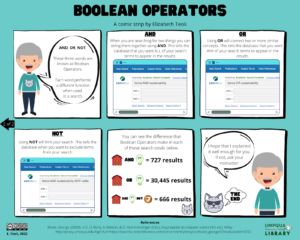 I had created my very first OER. I put the static comic image in my course shell, but I didn’t even think about creating alt-text captions for it. Somewhere in the back of my head I knew I’d be going back and doing that, but the section on Boolean Operators was opening the next morning and I simply didn’t have time to figure out how to do it. Now, there’s a short URL (https://bit.ly/Teoli_Boole) that leads you to a Google Doc of the text, and it’s even linked to a QR code. While prepping for this blog I also added a “setting the scene” section, and ensured that all comic “boxes” were titled using the appropriate headers in Google Docs so that screen-readers would follow them correctly. 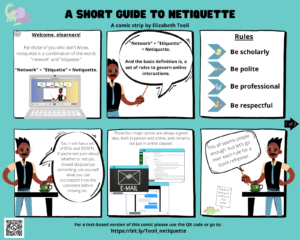 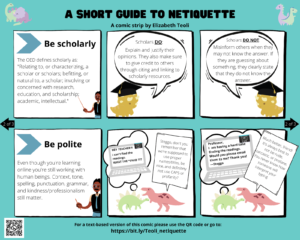 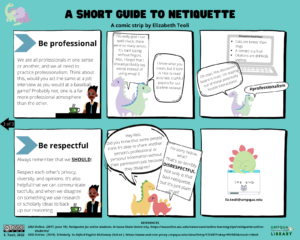 With both of those projects under my belt I decided that it was finally time to tackle updating the content for my class as a whole. Originally, the course was structured with each week focusing on a different part of the research process. I again decided that there had to be a better, more digestible way to deliver this instruction. Something that students might remember, or engage with, more than basic words on a page.

Working with the different steps as the outline I began to illustrate each one. The goal was to select a topic that people could relate to and research it from beginning to end in this illustrated format. One of the biggest things that I have noticed students struggling with is selecting a topic, and then understanding how to get from a big picture topic to something manageable and actually researchable, so this was one of my favorite sets of panels. You can see the finished result by clicking on The Research Process (Bilingual) panels below; alt text will be available soon via the same link. 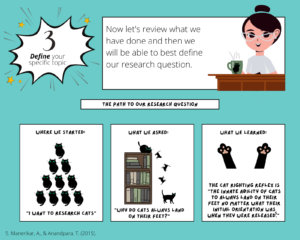 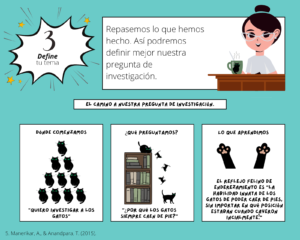 After working on this project off and on for the better part of 2 months I hit crunch time, my students had reached the portion of my newly renovated course where they were going to dive into the research process, and I wanted to assign my comic book as required reading for the following week. I buckled down and finished the last few steps and called it a day. I had made a product that I was super proud of in a medium that I wasn’t the most familiar with to explain something that’s both basic and incredibly detailed at the same time…with cats!

Because there is a shortage of materials in both English and Spanish at my school, and within the open education movement in general, I reached out to my writing partner, Alejandra Méndez, to see if she would be interested in translating the text into Spanish and then having the English and Spanish versions side by side as a dual-language primer on the research process. She got to work on the translations immediately, and I began hunting for ideas on how to make this book screen-reader and alt-text friendly. I attended a monthly drop-in meeting of Oregon’s OER point people and posed my questions. The responses I received were amazingly positive, and gave me ideas that I never would have thought of on my own.

People have asked me why I took the time to make this comic book when the information was already written. It’s because it’s a topic that I’m passionate about, and I want students to see that it can be fun, engaging, and scholarly. A colleague asked me the other day why it is that I want to offer it with a Creative Commons license instead of “publishing it normally.” It’s more important to me to have quality work available to more people than it is to have a print copy that goes through rigorous publishing standards. This comic book can reach people far and wide, and faster, thus enabling the chance for them to read it, use it, and understand it. Additionally, it allows for customization, reuse, remixing, and the opportunity for it to grow into an even bigger project.

Dylan DeLoe says it best in his blog post, The OER Movement Needs a Change:

Education and by extension the OER movement must continue efforts of true inclusion by adopting materials that use students’ native languages. The surge of Spanish speakers in Oregon has not been ignored by the statewide OER program, and the current projects to translate materials can and should set precedent for the many other languages that encompass the Oregon experience, whether that is Umatilla or Vietnamese or any language.

If I can make this research process comic available in English/Spanish, then why not other languages? I can easily create a template with the English text on one side and blank bubbles on the other for the translations.The only major hurdle that I need to tackle to make it available truly free is the platform in which I built it. I used Canva, for which I have a paid subscription. So, I can share the file to be edited by others, but it would have to be done using proprietary software, which can be problematic.

The next step that Alejandra and I would like to take with this project is creating an audio-based version. That way the text is not just available, but it’s a true audiobook.

Updates on the Future for 2023

How do we manifest equity in our classro[...]

Are you an instructor who is concerned a[...]